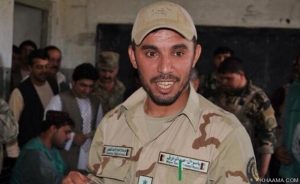 He walks down the streets of Kandahar he is greeted by kids requesting autographs and they ask to take pictures with him. The elders invite him over for some tea and the city merchants never accept money from him. Who is the man who has made the Great Kandahar one of the most secure and safest provinces in all of Afghanistan, the man who Gul Agha Sherzai calls “King of Kandahar”. Yes, Kandahar the once Taliban stronghold, the heart of the Taliban government, the province that no outsider never felt really safe. He is a short man, with a small stature and usually a little beard which does little to no justice on reflecting on who he truly is. He has put fear into the eyes of the Taliban, this is unprecedented to date. He gave hope to everyone in Afghanistan that the Taliban can be beaten with might and strength as his province is of proof it.

He is our Raziq, General Abdul Raziq has become one of the most popular men in and outside of Afghanistan. He has become a hero and hope for a peaceful Afghanistan, General Raziq’s popularity stems from the people, he is for the people and stands with the people. His great relationship with American forces especially with their higher ranking officers has made him a favourite in American and Afghan ranks. He started with the Achakzai anti-Taliban forces fighting against the Taliban, he rose up to chief of the Achakzai tribe. But he is cut from a cloth, he is the new generation of Afghans that have let go of the tribal state of mind. The Achakzai tribe fierce enemy the Noorzai have not fought each other yet and General Raziq is doing a great job on keeping that way.

General Raziq is a product of a private American military company that trained Afghans in Pakistan to bring down the Taliban. He started out as a regular soldier with his ambition and skills rose up to Provincial police chief of Kandahar with a spell with the Border chief police in Spin Boldak. General Razziq has avoided attacks on his life countless times; maybe over 10 times, people have been killed around him however he usually walks off with a slight injury and that is it. He is definitely a marked man however his ruthless policy on the Taliban has decreased Kandahar’s bombings by 2/3rds.

President Ashraf Ghani has vowed to rid of all regional strongmen to create a strong centralized government. The regional strongmen which Afghanistan has become accustomed to the last 30 years take away from democracy which can lead the society on distrust of the government. A democratic government then becomes a dictatorship, General Raziq has already been accused of using fraudulent votes for Karzai. General Raziq has also been connected to a substantial amount of drug smuggling in and out of Afghanistan and it is said he is making fortunes from Afghan border customs. The Afghan government is actually receiving about 1/5 of what it should be receiving from the customs border. General Raziq’s brutality has made him fierce enemy against the Taliban and other enemies, but also an enemy of the state.

The questions remains what does President Ghani do with this powerful and influential man, does he turn the blind eye so as long as there is peace in Kandahar like Karzai did? Or does he act to rid of him which will make Kandahar more vulnerable to Taliban attacks? There is an ethical question here and it is are the lives he is saving worth more than promoting just behaviour on an ethical scale? It truly depends on what we Afghans value at this critical stage, which is peace right now, the policy makers will make the final decision but it us who has to live with it in truth.

In reaction to the interview of the exiled president of Afghanistan, Ashraf Ghani Ahmadzai, Chargé...

The Spanish Ministry of Foreign Affairs announced that a flight carrying 300 Afghans had landed...