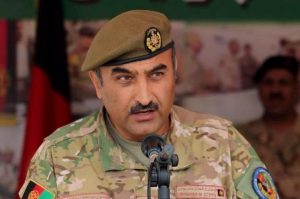 The former commander of the Special Forces Unit of the Afghan National Police Gen. Syed Mohammad Roshandil has been appointed as the new security chief of Kabul.

The Ministry of Interior (MoI) in a statement confirmed the appointment of Gen. Roshandil as the new security chief of the capital.

The statement further added that Gen. Roshandil has been appointed based on the recommendations of the Ministry of Interior and the approval of the Presidential Palace.

The Ministry of Interior (MoI) also added that Gen. Roshandil was introduced to the Kabul Security Commandment today by the Minister of Interior Wais Ahmad Barmak.

Gen. Roshandil has also served as the Chief of Staff of the Senior Deputy Interior Minister’s Office for Security.

His appointment as the new security chief of Kabul comes amid deteriorating security situation in the capital city with rampant insurgency and terrorist related activities by the anti-government armed militnat groups.