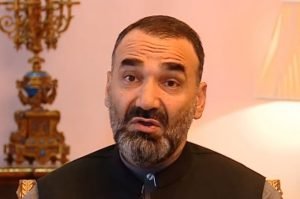 Speaking to a gathering of the tribal elders and residents of the northenr provinces of the country on Tuesday, Noor claimed that the government will attempt to oust the Kandahar governor Gen. Raziq as part of their conspiracies against the influential figures.

However, he insisted that Gen. Raziq will not be alone and will be supported against the conspiracies, similar as he (Gen. Raziq) supported him against the recent upheavals.

The Afghan government officials have not formally commented regarding the latest claims of Noor so far.

This comes as efforts are underway to introduce the new governor of the northern Balkh province after the presidential office announced the approval of Noor’s resignation from the Balkh government leadership.

Speaking during a gathering on Saturday Noor said none one can dismiss him as the governor of Balkh province by issuing a decree, insisting that the political party he is representing is one of the main sides which played a key role in the formation of the government of national unity.

He also harshly criticized Abdullah and blamed him for conspiring against him in the government and attempting to dissolve the Jamiat party as he called him a snake up in one’s own sleeves.