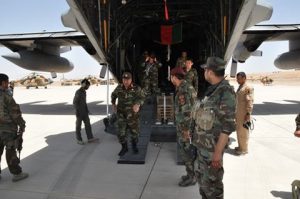 Gen. Murad said he has started visit to Kunduz province to lead operations in a bid suppress the militants in this province.

He said his visit to Kunduz province follows shortly after controlling the security situation in southern Helmand province where the Taliban militants launched a coordianted attack.

The Afghan National Defense and Security Forces (ANDSF) recaptured the control of the key Khanabad district in northern Kunduz province late on Saturday evening, hours after fierce clashes that erupted following the fall of the district.

Kunduz has been witnessing deteriorating security situation in the past one year amid rampt Taliban-led insurgency across the country.

The Taliban insurgents have intensified attacks on Kunduz province and launched numerous attacks on key districts of the province during the past several months.

Taliban militants also attempted for several times to take control of the strategic Kunduz city which was briefly captured by the group last year.