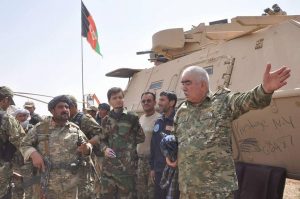 The hideouts of the Taliban militants were targeted during the operations led by Vice President General Abdul Rashid Dostum in northern Jawzjan province of Afghanistan.

The militants were targeted in Al-Moghul and Bainaghoor areas of Jawzjan, leaving at least 15 dead and 7 others wounded.

The Afghan Air Force played a key role in the operation to target the fleeing Taliban insurgents, the Vice President said, adding that hideouts were the group’s main sanctuaries created in north and following the operations in Jawzjan.

Gen. Dostum further added that Taliban’s shadow district governor in Aqcha Qari Hafizullah was in charge of the hideouts created in the named areas.

He said another hideout belonging to Taliban commander Turan Amrullah was destroyed during the operations in Bainaghoor area.

The operations were launched in the early hours of Monday morning and continued until Monday noon, Gen. Dostum said, adding that the Afghan forces did not suffer any casualties during the operations.

According to Gen. Dostum, a number of key Taliban group members are among those arrested during the operations and they were involved in major terrorist attacks during the past several years in this province.