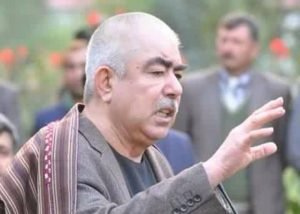 The First Vice President Gen. Abdul Rashid Dostum has reportedly set a deadline for the Taliban militants to surrender in northern parts of the country.

Head of the media and communications for the Vice President’s Office Sultan Faizi has told Ariana News that Gen. Dostum has set a week deadline for the Taliban militants in northern parts of the country to surrender and join peace process.

Faizi further added that the steps by Gen. Dostum are taken in coordination with the Presidential Palace.

He ruled out concerns regarding the establishment of militia forces to combat the Taliban militants and insisted that the recent steps by Gen. Dostum are aimed at improving the security situation of the country.

This comes as Gen. Dostum said Friday he is personally ready to go to the front line to fight the Taliban militants if the insurgency activities by the Taliban group persist.

During a trip to northern Faryab province of Afghanistan on the occasion of first day of Eid al-Fitr, Gen. Dostum promised to stand with the people of Faryab amid ongoing violence by the insurgents.

He said the previous policies of the Taliban group is not acceptable and emphasized that he is hopeful regarding the ongoing peace efforts by the government.

This comes as the acting provincial governor for northern Balkh province of Afghanistan Ata Mohammad Noor said Friday that joint operations will be launched to clear northern parts of the country from the militants.

Speaking during a ceremony to mark the first day of Eid al-Fitr in Mazar-e-Sharif city, Noor said the operations would be launched based on an agreement reached with First Vice President Gen. Abdul Rashid Dostum and Second Deputy CEO Haji Mohammad Mohaqiq.