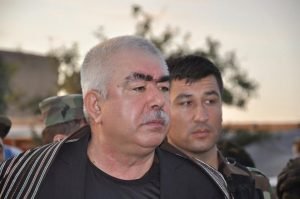 The First Vice President Gen. Abdul Rashid Dostum strongly rejected allegations of genocide during the operations led by him in northern parts of the country.

Gen. Dostum said those who accuse him of genocide are speaking on behalf of the regional spy agencies directly involved in the ongoing violence across the country.

He said such remarks are made by those who organized funerals for the former Taliban supreme leader Mullah Mohammad Omar.

Gen. Dostum is currently in northern Faryab province of Afghanistan to coordinate military operations against the anti-government armed militant groups amid deteriorating security situation in this province.

He joined the Afghan security institutions and top government officials for blaming Pakistan’s military intelligence for the ongoing violence in the country.

In his remarks following a series of deadly attacks in capital Kabul, Gen. Dostum said the Pakistani military generals and the country’s powerful military intelligence – Inter service Intelligence (ISI) are plotting and coordinating attacks across Afghanistan, under the name of al Qaeda, Islamic State affiliates and Taliban militants.

According to Gen. Dostum, the ongoing violence in Afghanistan could end only if Pakistan’s military and ISI truly cooperate with the Afghan government.

In the meantime, he warned that the issue will be shared with the National Security Council upon his return to Kabul and those who accuse him of genocide would face prosecution for the irresponsible remarks.

Gen. Dostum insisted that he is leading counter-terrorism operations to bring peace and stability in northern parts of the country and emphasized that his presence in these operations is not aimed at killing the residents of these provinces.

His remarks were followed after he was accused of genocide against Pashtuns by certain activists and analysts during television and media debates.