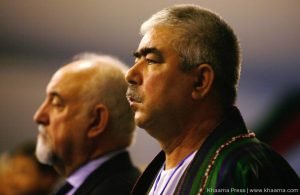 The first Vice President Gen. Abdul Rashid Dostum has rejected a report by New York Times suggesting the prominent political leader has been sidelined by the leaders by the government of national unity.

Calling the report as baseless and bised, Gen. Dostum said the report “was 100% untrue rather it was completely fabricated and based on false information.”

Quoting unnamed officials in Presidential Palace, the Times reported that Gen. Dostum was being ignored by the roomful of powerful people including President Ashraf Ghani and his national security advers Hanif Atmar during a national security council meeting.

The report also added that Gen. Dostum has found himself marginalized since taking office in September and has become deeply frustrated by what he feels is an indifference to his decades of combat experience and leadership as the strongman of the ethnic Uzbek minority.

However, the office of Gen. Dostum has issued a statement saying that the “In this report, First Vice President Dostum has been targeted of character assassination and unfounded, baseless and false accusations were labeled against him, which is in no way acceptable to us.”

The statement further added Gen. Dostum enjoys his constitutional rights as the First Vice President and strongly believes in teamwork with President Ashraf Ghani as President and commander in chief.

“It is unnecessary to prove such claims that the General was on the edge of crying which doesn’t even stick to his personality and nature,” the statement added.

The statement also added that Gen. Dostum is a national figure who enjoys enormous support among all Afghans and his passion to bring stability and peace in the country is well regarded among all sphere of the society.

“He spends much of his time serving his nation particularly women empowerment, democracy, freedom of speech, national unity, implementation of rule of law and youth in Afghanistan,” the statement said.

Gen. Dostum’s office also sought a clarification and full explanation regarding the report saying that “These kinds of reports are too small to damage General Dostum’s well-known character, but it could help in shaping a negative perception on people’s mind about General Dostum.”