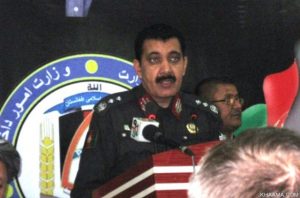 The appointment of Gen. Abdul Rahman Rahimi as the new Kabul police chief has been confirmed following the approval of ARG Presidential Palace.

According to reports, Gen. Rahimi was recommended to replace the former police chief Gen. Mohammad Zahir Zahir who resigned from his position earlier this week.

Gen. Zahir resigned from his position following a series of coordinated attacks by Taliban militants in Kabul city during the recent weeks.

A security source privy to the development said Gen. Zahir has been appointed as head of the Criminal Investigation Department.