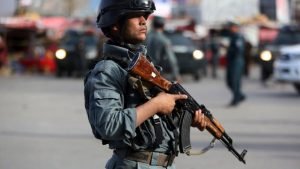 Four soldiers from the Afghan National Army (ANA) sustained injuries in a bomb explosion in Kalakan District of Kabul province this morning.

Rahmatullah Khan Faqirzada, governor of Kalakan District said the bomb had been placed on a roadside in Babush area, adding that it exploded as the ANA vehicle reached there.

No one has been arrested in connection to the blast but Faqiradad said that an investigation was initiated.

There is no word of responsibility for both attacks.