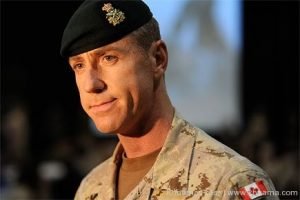 According to reports, a former Canadian Army General who was working for a private security firm has been jailed in Afghanistan since three weeks.

Daniel Ménard, the former Canadian brigadier-general was reportedly arrested by Afghan security forces or about 12 January 2014.

Ménard, who was working for a private security firm Garda World, was arrested while he was returning from a meeting with the Afghan government officials, the company officials said.

Joe Gavaghan, a spokesman for the company quoted by The Toronto Star, said, “He was leaving a meeting at the ministry office and a couple of officials approached him. They said, ‘We’ve got a problem with something and we’d like you to come with us to clear it up.’ Off he went and the next thing he knew he was going to be detained until they cleared it up.”

Gavaghan further added that Ménard has not been charged with breaking any laws, and has been arrested due to misunderstandings related to its licence to operate in Afghanistan as a private security firm.

The former commander of the 5 Canadian Mechanized Brigade Group, based out of CFB Valcartier, appeared in a Kabul court Wednesday, Gavaghan added.

Ménard was reportedly fined and demoted for having sexual relationship with with a female corporal under his command on active duty.

He has managed Garda’s operations in Afghanistan since November 2011, after he was relieved of his command of Canadian troops responsible for Kandahar region in May 2010.