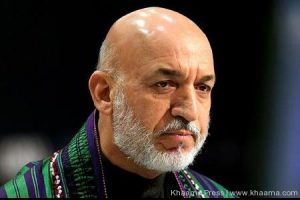 Afghan president Hamid Karzai on Tuesday said that the foreigners are struggling to main peace through dispersed peace talks and such conspiracies will result to weaken Afghanistan in the future.

While speaking during the third national conference on water resources administration and development president Karzai said the Taliban group should hold peace talks only with the Afghan high peace council since all political elders from various ethnicities are present in the council.

Karzai also said that dispersed peace talks will lead to no result and the government of Afghanistan will not allow such talks.

He said the foreigners are trying to encourage Afghans to hold peace talks outside the high council frame but such talks will have no impact on the security situation and will have negative consequences.

Afghan president Hamid Karzai also warned that the government of Afghanistan will never allow foreigners to weaken the Afghan government through peace negotations.

Since U.S.-backed talks broke down last March in a dispute over the release of five Taliban detainees held in American custody at a military prison in Guantanamo Bay, Cuba, the High Peace Council has tried to take a greater role.

The Taliban, meanwhile, have established a presence in Qatar and the council says they are hoping to be involved in talks with those in the Doha office.