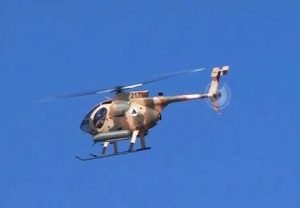 At least twenty one militants including foreign nationals were killed in the latest airstrikes conducted in western Farah province of Afghanistan.

The Ministry of Defense of Afghanistan in a statement said the new airstrikes were carried out in the vicinity of Khak-e-Safid district.

The statement further added that seven Pakistani nationals were among those killed and at least three vehicles and several weapons were also destroyed.

Farah is among the relatively restive provinces in West of Afghanistan where the anti-government armed militant groups including the Taliban insurgents are actively operating in some of its districts.

A senior Taliban leader who was in charge of the Red Unit command of the group for western Farah province was killed during a counter-terrorism operation in the same district late last year.

The Ministry of Defense (MoD) spokesman Gen. Dawlat Waziri said the Taliban leader Daud Muzamil was initially injured in an airstrike conducted in Khak-e-Safid district and subsequently died of his wounds.

Gen. Waziri further added that Muzamil was in charge of the Red Unit command of the Taliban besides he was appointed as the military commission chief of the group for Farah.

He said at least eight people were killed in the airstrike and eight others including commander Muzamil were wounded.

According to Gen. Waziri, commander Muzamil died of the wounds he had sustained during the airstrike.