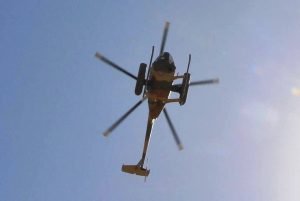 At least thirteen militants affiliated with the Islamic State of Iraq and Syria (ISIS) terrorist group were killed in the airstrikes conducted in northern Jawzjan province of Afghanistan.

The 209th Shaheen Corps of the Afghan Military in the North said at least two foreign insurgents hailing from Tajikistan were also among those killed.

The source further added that the Afghan Air Force carried out a series of airstrikes on ISIS hideouts in Darzbab district, leaving at least thirteen militants dead.

According to the Shaheen Corps, the airstrikes were carried out in Chakan village and the militants killed in the airstrikes all belong to Qari Hekmatullah group.

The anti-government armed militant and terrorist groups including ISIS insurgents have not commented regarding the report so far.

Jawzjan is among the relatively volatile provinces in North of Afghanistan where the anti-government armed militant groups including Taliban, ISIS, and other insurgents are actively operating in some of its districts.

This comes as at least fourteen ISIS militants including two foreign nationals hailing from Uzbekistan were killed in similar airstrikes in Darzab district nearly three weeks ago.