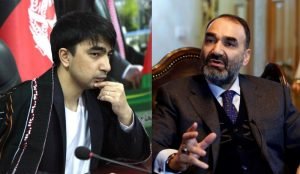 The Civil Aviation Authority of Afghanistan intervened to shed light on the cancellation of the flight of Ata Mohammad Noor, Batur Dostum, and other political figures to Kandahar as the issue has sparked further tensions among the key political leaders.

A statement by the Civil Aviation Authority said the flight was due to take place at around 9:45 am on Friday but the issues in the flights schedule, it was delayed for the night.

The statement further added that the flight at night also did not take place due to the lack of facilities in Kandahar airfield.

According to the Civil Aviation Authority, the flight was subsequently cancelled due to the issues and on the other hand they could not coordinate with the NATO forces based in the airfield.

According to Noor, a delegation led by him including Batur Dostum and other figures were due to visit Kandahar to participate in a gathering but their flight was aborted after waiting for one and half in the plane.

In the meantime, reports indicate that the government did not allow the flight to take place as there were security threats claiming that the Taliban group was looking to attack the plane.