Five civilians kidnapped on highway between Jawzjan and Sar-e-Pul 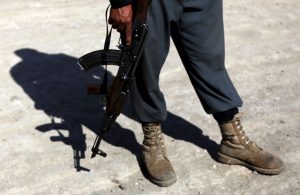 A group of unidentified gunmen have kidnapped five civilians on the highway between Jawzjan and Sar-e-Pul provinces.

Officials at the Governor House of Jawzjan say that the incident took place yesterday and kidnappers have taken these people to unknown location.

All these people belong to Jawzjan province, said Abdul Manan Rawoufi, an officer at the province’s police HQ.

No group has claimed responsibility for the abduction but Rawoufi said that efforts have been made to secure the release of these hostages.

About 21 days pass but yet there is no information about his whereabouts.

Jawzjan is a volatile province in the northern part of the country where armed militant groups are operating in its remote areas.

They sometimes carry out attacks in the provincial capital as well.