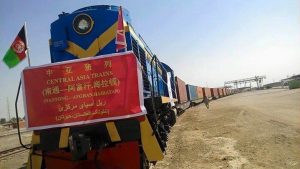 The first ever cargo train from China arrived in the main Hairtan port located in North of Afghanistan on Wednesday, boosting hopes among the Afghan officials to find access to alternative routes for transit.

The cargo train apparently left Nantong in China and travelled several days to reach to its final destination in the strategic Hairatan port of Afghanistan.

Hairatan port is a small city located to the border between Uzbekistan and Afghanistan, according to the Ministry of Commerce and Industries of Afghanistan.

This city is located in the north of Balkh province and is one of the necessary business ports of Afghanistan. Border line between these two countries is Ammo River.

In the year of 1982 bridge of Dosti (Friendship) between mentioned countries was built by the USSR Soviet that links Afghanistan with the Middle East countries china and Russia.

Hairatan route was the safest business way in Afghanistan during 33 years of war.