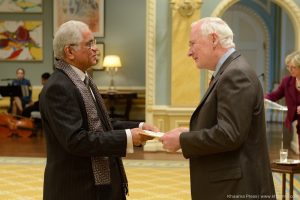 A Hindu Afghan was was for the first time appointed as the ambassador of the Islamic Republic of Afghanistan.

The Afghanistan embassy in Canada following a statement said the newly appointed ambassador Sham Lall Bathija, presented his Letters of Credence to His Excellency the Right Honourable David Johnston, Governor General and Commander-in-Chief of Canada, at a ceremony held in Rideau Hall, Ottawa.

Mr. Bathija was called an extraordinary, plenipotentiary and special envoy of the Afghan Islamic Republic of Afghanistan.

The Presidential Palace officials said Sham Lall Bathija is a senior Afghan diplomat who specializes in economy and has good knowledge of economic affairs in developing countries.

Bathija was born in southern Kandahar province of Afghanistan and has completed his higher education in the field of economy and law in India, according to BBC Persian.

He has worked in various international organizations including the United Nations and has resided in United States of America.