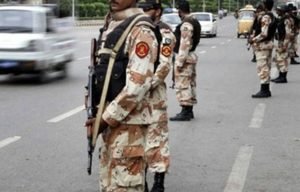 An incident of firing has been reported near the Afghan consulate in Karachi city of Pakistan.

The incident took place in Old Clifton area but the nature of the incident has not been ascertained so far.

The area of the incident was cordoned off by the security forces of Pakistan shortly after the sounds of firing were heard.

The Afghan Ambassador to Pakistan Hazrat Omar Zakhilwal confirmed the incident and said at one person was killed in the incident.

“Firing inside Afg Consulate General in Karachi at around 12:30pm today (about an hour ago) has been carried out by an Afghan guard inside the compound resulting in fatality of one of our diplomats,” Zakhilwal said.

He also added that the incident seems to be a personal dispute related criminal act.

In the meantime, police officials in Karachi have said the slain diplomat has been identified as Mohammad Zaki and the assailant guard has been arrested by the police forces.