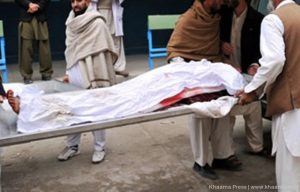 A female journalist was murdered by unidentified men in northern Balkh province of Afghanistan.

According to reports, Miranzai was repeatedly stabbed by unidentified men inside her house in Mazar-e-Sharif city.

The main motive behind her murder is not clear so far and security officials have not commented regarding the incident yet.

She was working as media analyst in Bayan news network and had recently returned to Afghanistan after completing her higher education studies in Thailand.

The Afghanistan Journalists Center (AFJC) in its annual report said earlier this year that 84 cases of violence were registered during 2013 across the war-torn country.

AFJC in its report said the cases include murder, injuries, physical and verbal abuse, death threats and closure of media outlets from January to December 2013.

The report warned that violence against reporters is increasing amid fears that illegal armed groups will intensify attacks on media in future.