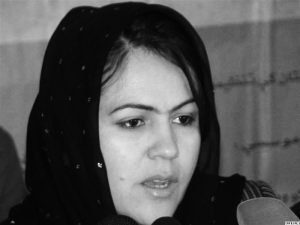 Fawzia has made her leadership journey in a country of harsh topography, internal conflict, intermittent wars and a militant government. She completed high school during the war ravaged years and entered a competitive medical school. But soon after the Taliban took over in September 1995, and barred women from access to all education! Finding the doors of a university education closed to her, Fawzia focused her energy towards women’s right organizations, and worked closely with one of the most vulnerable group such as Internally Displaced People (IDP), and marginalized women and children. After the fall of the Taliban, she continued law faculty night shift while still working with UNICEF, though her wish was to become a doctor and treat human being which are in dispread need of medical assistance due to war and its consequences , particularly women, her country has highest number of maternal mortality in the world, out of a hundred thousand life birth six thousand five hundred woman die due to lack of access to medical facilities and female doctors, but because of faculty duration which is seven years and that medical faculty had no night shifted , she shifted to law and acquired a law degree and later pursued a Masters in Business and Management from Preston University.

Since 2001, women could participate in all aspects of life particularly in the public sphere. Fawzia’s political family background and orientation to public service propelled her to take hold of these new opportunities that were paving the road for many women. She decided to run for a seat in parliament from the Badakshan province, a northeastern province. Her campaign was a success and she was elected Member of Parliament from that province in September 2005, Afghan parliament is assigned with three main responsibilities according Afghan constitution, people representation, law making, and oversight of the executive branch.

In 2005, right after the first elected parliament after 33 years, Fawzia was elected as the first woman Second Deputy Speaker of Parliament in the history of Afghanistan.

Fawzia main focus area has been human rights, especially women’s and child rights.  Afghanistan also suffers from rampant corruption and she has been advocating for integrity, accountability and upholding the rule of law .With all the challenges, the fact she managed to make her presence felt in parliament, by participating in debates, initiating legislation and suggesting resolutions to address insecurity, rule of law and other challenges that her government is faced with it, is a giant leap for women in Afghanistan. Some of the key women’s initiatives that she has championed include the improvement of women’s living conditions in Afghan prisons, by approving resolutions, with her efforts a commission to work on the issue of violence against children is established, the commission is chaired by Afghanistan first vice president, is tasked to draw a short term and long term strategy to address violence against children especially sexual abuse of children which is increasing recently in Afghanistan.  She also advocates for amendment of laws that suggests savior punishment for perpetrators of child sexual abuse. She has worked with other human rights activist on the shia personal status law, with her support women were mobilized for advocating and asking their rights through putting pressure on the government to amend this law which puts women on more discriminative environment, with lots of pressure and lobbying finally government has brought amendments to this law. She promoted women and girls education, by advocating for access to good schools, as well as creating opportunities for non formal education for out of school children in her constituents, Badakhshan province.

As a young woman in a heavily traditional country, to come this far, Fawzia has battled male domination, imposition of men’s selective religious interpretation on the rights of women and issues of power between men and women, and the old and new generations. Young people are seen as a threat by traditional power holders who do want the new generation to organize and be in a position to challenge traditional authority.

The current parliament term finishes 2010,  in ten years time, Fawzia wants to see more women take leadership of Afghanistan, and even become president and or prime minister. Her message to world young leaders is to never give up, as things will change one day through continuous effort.