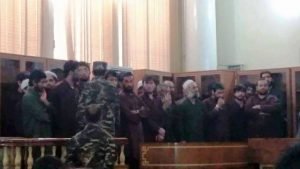 The trial of at least 49 men accused in brutal murder of Farkhunda over false Quran burning allegation formally kicked off in Kabul court today.

The accused men were introduced to 3rd district preliminary court earlier today in the presence of media.

The trial was formally launched after the Attorney General Office referred the cased of the alleged perpetrators to the Supreme Court of the Country.

Safiullah Mojadedi, head of the primary court in 3rd police district, said last week that at 19 policemen and 30 others will face trial regarding the brutal murder of Farkhunda.

Farkhunda was lynched, run over by a car and her dead body was set on fire last month after she was accused of burning holy Quran in Shah Do Shamshera shrine – an accusation that was proven as false following an investigation by the Ministry of Hajj and Religious Affairs of the country along with the other relevant authorities.

She was accused of desecration to holy book of Islam after she spoke out against the superstitious practices she had witnessed with mullahs selling good-luck charms.

Her brutal murder also sparked several unprecedented protests in Kabul and other major cities of Afghanistan.