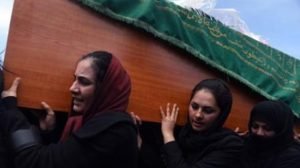 On the morning of 19th March two days before the Afghan New Year, the yelling of Allahu Akbar (Allah is great) cried out by a preacher in one of Kabul’s most respected shrines, Shah-Do Shamshira, provoked an angry mob of men to blindly beat a 27 year old Afghan woman named Farkhunda to death and set her body on fire for allegedly burning the Holy Quran. Farkhunda’s death set humanity to mourning, yet allowed Afghans to welcome the New Year in a different way, in which people pledged to cooperatively stand against injustice, paved the way for women’s empowerment, broke the invalid chains of superstition and blind belief, and awakened the Afghan National Unity Government to reevaluate its weak and ineffective law enforcement.

Farkhunda’s mother was probably busy decorating the haft-seen table, a traditional table setting of Persian New Year called Nowruz and sewing a new dress for her beloved daughter to wear on the New Year. Her father perhaps bought dry fruits and sweets to see his beloved daughter enjoy eating them with her friends, when suddenly Farkhunda’s painful screams at rocks hitting her face, echoed in her parents’ hearts. Hearing her daughter in pain, the poor mother fainted with anxiety. Seeing blood stream down the face of Farkhunda, who was brutally hunted down by an angry crowed to satisfy their bloodlust, the tears dried up in her father’s eyes.

The mob lacked human compassion and was deaf to Farkhunda’s helpless pleas. Even a woman passing by, perhaps motivated by the yell of Allahu Akbar without knowing for what purpose, kicked the woman mobbed by ignorant opportunists.

After the truth was revealed that the deceptive mullah had intentionally accused Farkhunda for blasphemy though she did not burn the Quran, but an amulet (Taweez), masses of people including men and women took to the streets of Kabul demanding justice for her wounded soul and charred body. Farkhunda, as a martyred Afghan soul, wrote on a new page of Afghan history with her blood that no human being should submit to injustice. Rather they must take a strong stance against rights that are violated and lives that are lost.

The collective protests against Farkhunda’s murder indicate that unlike the expectation of the world that Afghan society easily disregards the value of a woman’s life, Afghan women are gaining power and courage more than ever to shape the history of the country. This strength is explicitly witnessed when for the first time in the history of Afghanistan, women defied Mullahs to bury the martyred soul and break with tradition to carry the coffin of Farkhunda and bury her themselves. This is a revolution happening in Afghan society. The aftermath of Farkhunda’s murder demonstrates that people are no longer willing to be locked behind so-called traditional values. Farkhunda’s murder was not hidden behind the shadows, rather the slogans “I am Farkhunda, I am alive for ever” cried out by young and old Afghan women constantly for many days in the streets, caused her injured soul to breathe and live again, and stand against inhumanity.

Farkhunda decried how most Mullahs are playing with people’s feeling for their personal gains. In Afghan society, many people, whether ignorant or educated, patronize preachers, who claim to cure any kinds of diseases that well educated and expert doctors in the world are not capable of curing and who claim to solve any kind of conflict as their words are derived from the Holy Quran. However, Farkhunda’s murder by such Mullahs and the crowd who thoughtlessly followed the preacher’s announcement exposed the fact that fake Mullahs are deceiving people solely for their personal gains even if it leads to an innocent person being beaten to death.

Consequently, Farkhunda’s death encouraged people to demand the dismissal of government officials and religious leaders who justified Farkhunda’s murder in the hope of gaining public support, ignoring the fact that the life of a human being is more worthy than false and impulsive religious sentiments. Farkhunda’s death, two days before the Persian New Year awakened the Afghan National Unity Government to embark on a new beginning and strengthen its weak law enforcement.

The increasing number of events being organized both in social media and societies around the world and the huge number of posts and articles written about Farkhunda’s innocence, illustrate that humanity will always overcome false sentiments and injustice.

Farkhunda is gone, but she is alive as we are all Farkhunda. We demand justice for Farkhunda and for ourselves. Farkhunda’s death is a lifetime inspiration for all of us for combating all forms of injustice.

Fatima Hashimi grew up in Pakistan and Afghanistan and is majoring in Philosophy, Politics, and Economics.

A woman sits with her children along the roadside covered with snow in Kabul on December 16, 2021. (Photo...