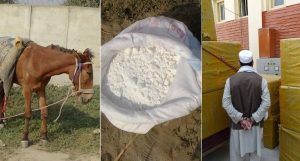 The officials further added that the horses and explosives were confiscated by the Afghan intelligence operatives during an operation in Durbaba district.

The provincial government media office in a statement also confirmed that the operatives of the national directorate of security confiscated two horses laden with explosives from Jangoor area of the district.

The statement further added that the militants had loaded around 50 kilograms of explosives on the two horses which were confiscated at around 4 pm local time on Sunday.

No suspect has been arrested in connection to the smuggling of the explosives and operations are underway in this regard, the provincial government added.

In another operation, the Afghan security forces confiscated sixteen cartons of mobile phones as the smugglers were attempting to smuggle it through Jalalabad city, the provincial capital of Nangarhar province.

The provincial government said the boxes containing mobile phones were loaded on a motorcycle and the smugglers were attempting smuggle them to the city by refraining to pay the taxes to the customs house.

An individual has also been arrested in connection to the smuggling of the phones and is currently in custody of the police, the provincial government added.