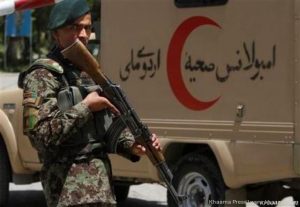 He said one explosion was carried out through a magnetic bomb attached to a vehicle belonging to Afghan National Army that martyred one soldier.

The second explosion targeted a civilian vehicle injuring a civilian, he added.

Ahmadzai said no arrests were being made in connection to the explosions but investigation was initiated by the security agencies.

These were not the only explosions today. An explosion in Nangarhrar’s neighboring Kunar province killed 7 people including children.

No group has so far claimed responsibility for today’s explosions.

Looking at the IEDs beside the ground engagements threatening civilian lives in the country, UNAMA has expressed fear that the civilian casualties may pass 10, 000 this year which will be the highest number of casualties ever recorded by the United Nations in Afghanistan.

The rate of the civilian casualties according to the data collected by UN is already higher than any other year’s data record.