British Parliament: UK’s Withdrawal from Afghanistan was a “disaster” 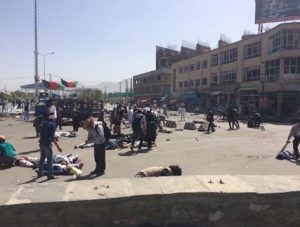 A suicide attack targeted the gathering of  a mass demonstration in capital Kabul leaving at least 80 people dead.

The Ministry of Interior (MoI) confirmed earlier last night that 80 people lost their lives and 231 others sustained injuries.

MoI further added that several security personnel were also among those killed or wounded.

The Ministry of Public Health (MoPH) officials earlier said at least 61 people were killed and at least 207 others have sustained injuries in the attack.

The incident took place in Deh Mazang area where the demonstrators had gathered for a sit-in protest.

The Islamic State of Iraq and Syria (ISIS) terrorist group claimed responsibility behind the horrific attack and said the group targeted a Shiite gathering in the city.

In the meantime, the Afghan security forces have launched a major operation to root out the loyalists of the terror group in eastern Nangarhar province from where they initially launched their operations.

British Parliament: UK’s Withdrawal from Afghanistan was a “disaster”

Members of the British House of Representatives recently stated that the United Kingdom’s...

The Taliban and the United Arab Emirates signed an agreement for the management of four Afghan...

The Taliban Sets Up a Commission to Convene a Loya Jirga

Shahabuddin Delawar, Taliban Minister of Mines and Petroleum, announced the formation of a commission...

The National Wheelchair Basketball Team of Afghanistan Wins Against UAE