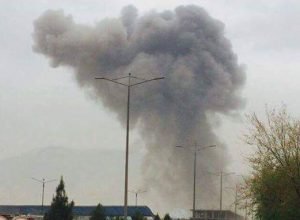 At least 64 people were killed and over 347 others were wounded after a heavy explosion rocked capital Kabul earlier today.

The Ministry of Interior (MoI) released the latest casualties toll a day after the attack, saying at least 64 people were killed and 347 others were wounded.

A police official earlier confirmed that the target of the blast was a unit of the Afghan Intelligence, National Directorate of Security (NDS) in Pul-e-Mahmood Khan area.

An NDS official said the target of the attack was not the 10th directorate of the Afghan Intelligence, National Directorate of Security (NDS) but the VBIED was detonated near the security directorate for the prominent figures.

Sediq Sediqi, spokesman for the Ministry of Interior, said the CRU forces are currently conducting search and clearance operations to make sure the assailants are not left in the area.

He said a large number of the civilians were killed or wounded in the attack but did not provide the exact number.

The Taliban claimed responsibility and said the suicide attack was carried out by the group.