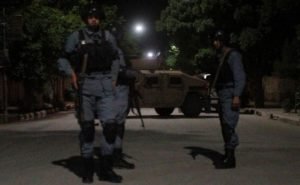 The incident took place in the vicinity of the 9th police district of the city.

The Ministry of Public Health said at least eleven people have been killed and more than twenty others were wounded in the attack, citing the casualties information received by the ministry.

A security source confirmed that a suicide bomber targeted the police forces in Bani Hesar area of the city and as a result at least 20 people were killed and more than 20 others were wounded.

No individual or group has yet claimed responsibility behind the attack.

This comes as dozens of people were killed or wounded in a coordianted suicide attack in Kabul city last week.

The Islamic State of Iraq and Syria (ISIS) terrorist group loyalists in Afghanistan claimed responsibility for the attack on a cultural center and news agency in Kabul.

The Ministry of Interior says a group of insurgents launched the attack on Thursday mornign leaving at least 41 dead and nearly 90 others wounded.

Thursday’s attack was one of the deadliest attacks carried out in Kabul city since the group has unleashed a series of deadly raids mainly on civilian targets in the country.