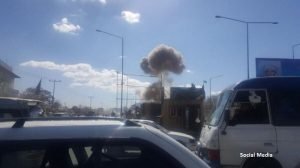 Back to back explosions rocked capital Kabul earlier this afternoon after a group of militants launched a coordinated attack on Police District#6 and Police District#12, leaving at least sixteen dead and over fifty others wounded.

The official further added that a suicide bomber detonated potent explosives placed in a vehilce near the Police District compound to open the way for the remaining militants to launch the gun attack.

According to the official, additional forces were deployed in the area and clearance operation is underway.

In the meantime, another official said a group of militants launched an attack on a security compound in the vicinity of Arzan Qeemat area in Kabul city.

The official further added that the attack was thwarted following fifteen minutes of clash with the assailants and at least three people were wounded.

Eyewitnesses in the area in PD#6 are saying that sporadic gunshots are also heard following the explosion.

The eyewitnesses are saying that the incident has taken place close to police district compound and the military university.

The Ministry of Public Health confirmed that sixteen dead person and over fifty others who sustained injuries in the two attacks have been shifted to the hospitals so far.