Explosion near Ministry of Rural Rehabilitation in Kabul city 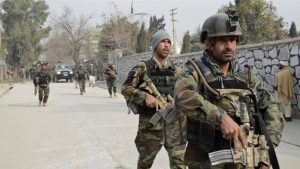 At least 12 people have been killed and nearly 30 others have sustained injuries in a suicide attack in West of Kabul city. (File Photo – Associated Press)

The Kabul police officials are saying at least 15 employees of the Ministry of Rural Rehabilitation and Development or wounded in a suicide attack near the ministry compound.

The officials further added that the casualties toll could further rise as the employees were targeted as they were leaving for their homes.

Kabul police spokesman Hashmat Stanikzai confirmed that the incident has taken place close to the entrance of the ministry and the area has been cordoned off by the police forces.

The Public Health Ministry officials are saying that the blast has left at least 12 dead and nearly 30 others have sustained injuries.

In the meantime, eyewitnesses in the area are saying that a suicide bomber detonated his explosives while the ministry employees were leaving for their homes and there are fears that several people have been killed or wounded.