Explosion near cricket board in Kabul 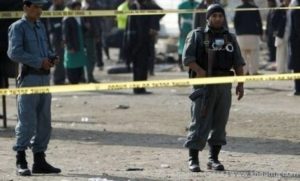 An explosion has taken place close to the cricket board of Afghanistan in capital Kabul.

The type of the explosion has not been ascertained so far and there are no reports regarding the casualties.

The officials further added that the Shpageeza cricket league players are safe and have not been hurt in the explosion.

Eyewitnesses are saying that the incident took place after a suicide bomber detonated his explosives.