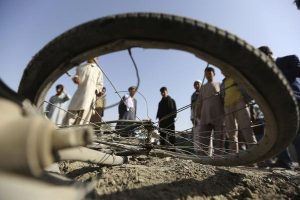 At least four people were killed and over 20 others were wounded in an explosion in southeastern Paktika province of Afghanistan.

According to the local government officials, the incident took place this afternoon in Jani Khel district.

The district administrative chief Haji Naeem confirmed that the incident took place in a market.

He said a motorcycle packed with explosives was detonated, leaving at least four people dead and over 20 others wounded.

According to Naeem, the victims of the incident are all civilians but the eyewitnesses are saying that some policemen were also available in the area when the incident took place.

Paktika is among the relatively calm provinces in southeastern Afghanistan but the anti-government armed militants are active in some of its remote districts.

Insurgents belonging to Taliban group as well as the Haqqani terrorist network are active in some of its distrits and often carry out insurgency activities.

The shadow district chief of the Taliban group was killed along with his fighters in a foreign forces airstrike in Barmal district earlier this month.