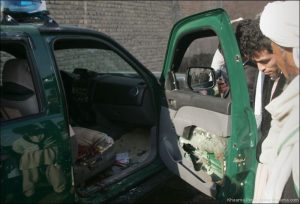 Provincial governor spokesman Abdul Bashir Basharat confirming the report said the incident took place around 11:30am in Nahrin district after the vehicle of Burka district chief struck with a roadside bomb.

No group including the Taliban militants has so far claimed responsibility behind the incident. Local officials blame Taliban group for the incident as Taliban fighters frequently use improvised explosive device as the weapon of their choice to target Afghan and coalition security forces and Afgahn government officials.