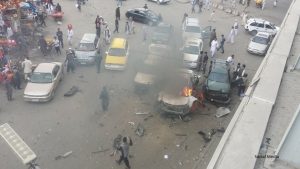 The incident took place in Kote Sangi area of the city with the preliminary reports suggesting the blast was triggered as a result of a magnetic bomb.

The official has been identified as head of the human resources department who was killed along with another individual and two more were wounded.

This comes as one person sustained injuries in a similar incident in Khair Khana area of the city on Thursday afternoon.

The incident took place while the security forces were busy defusing a magnetic bomb planted in a vehicle.

Earlier at least 80 people were killed and over 200 others sustained injuries in a suicide attack that ripped through a mass demonstration in Deh Mazang area of the city.