Explosion in a classroom in Khost leaves 5 students, 1 teacher wounded 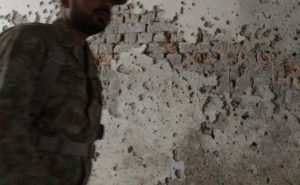 At least six people were wounded after an explosive device went off inside a classroom in a school located in the southeastern Khost province of Afghanistan.

According to the local education officials, at least five students and a teacher were wounded in the blast.

The officials further added that the explosives were planted in a classroom filled with 6th grade students in Matiullah Shahid high school in Khost city.

Taliban militants and insurgents belonging to other militant groups frequently use improvised explosive devices to target the security forces.

The militants normally use the improvised explosive devices on roadside while numerous incidents involving explosions inside mosques have been reported.

But detonating explosives in a classroom have been rare in the country and it is yet not clear who the target of the attack was.

Khost is among the relatively peaceful provinces in southeastern Afghanistan but the anti-government armed militant groups have been attempting to expand their insurgency across the country during the recent months.