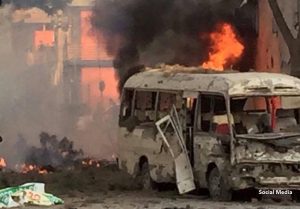 An explosion rocked Kabul city in the vicinity of the 10th police district earlier this evening, leaving at least one person dead and nearly nineteen others wounded.

A minibus was targeted as it was travelling between Taimani and Qala-e-Fatullah area of the city, carrying the employees of a private telecommunications company.

The Ministry of Interior (MoI) spokesman Sediq Sediqi confirmed the incident and said preliminary reports suggest at least one person was killed and nineteen others were wounded in the incident.

He said the person killed in the attack was a woman and at least nineteen others including women were wounded.

The type of the explosion has not been ascertained so far but it is believed the blast was triggered due to an improvised explosive device.

According to the officials, the vehicle was carrying the employees of a private telecommunications company.