Policemen among 7 killed or injured in Helmand bombings 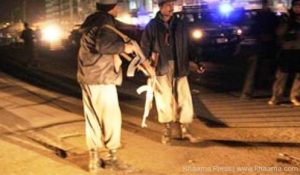 At least seven people including police officers and civilians were killed or injured following twin suicide attacks in southern Helmand province of Afghanistan.

Mr. Zwak confirmed that one police officer was killed and six others including policemen and civilians were injured following the twin suicide attacks.

He said, the third bomber was gunned down by Afghan police forces.