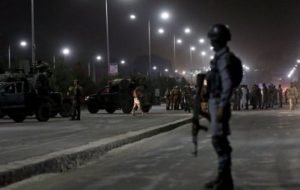 A relatively heavy explosion rocked capital Kabul early on Monday night after a suicide bomber detonated his explosives in Darul Aman area of the city.

Gun battle between the security forces and a group of at least four other militants broke out after the blast which continued sporadically until earlier this morning.

Sediq Sediq, spokesman for the Ministry of Interior (MoI), said Police Special Forces have been deployed in the area following the attack.

Kabul Police Chief Abdul Rahman Rahimi said at least seven policemen were injured in the attack but did not say anything about the civilian casualties.

The target of the explosion was the house of the former provincial governor of southern Helmand province Naeem Balouch.