Explosion and coordinated attack on army corps in North of Afghanistan 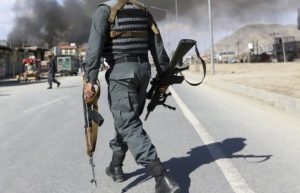 At least eight Afghan soldiers were killed and more than 10 others were wounded after a group of suicide bombers launched a coordinated attack on 209th Shaheen Corps of the Afghan army in northern Balkh province of Afghanistan.

The Ministry of Defense (MoD) officials said the attack was launched on Friday afternoon and continued for several hours until the militants were shot dead earlier this evening.

MoD spokesman Dawlat Waziri said the attack was launched by the militants with the help of the army vehicles and after the militants had disguised themselves in army uniforms.

He said the first assailant was killed as he was driving a car bomb towards the entry gate of the army corps.

General Waziri further added that the dead bodies of at least five militants were left in the area after the attack was over.

The Taliban militants group in Afghanistan claimed responsibility behind the attack.