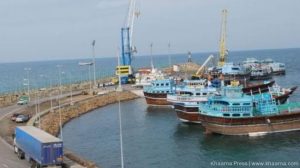 The ex-Pakistani defense officials have expressed concerns regarding the establishment of Chabahar port by Afghanistan, India, and Iran, saying the trade route linking Chabahar Port with Afghanistan is a security threat to Pakistan.

According to the local Dawn newspaper, the ex-defense officials were speaking during a three-day workshop on Monday which was hosted by a local think tank, Strategic Vision Institute (SVI) on ‘National Security, Deterrence and Regional Stability in South Asia’.

Malik further added that he feared that Pakistan is going into isolation.

“In view of the regional and global environment, I see Pakistan falling into an abyss of isolation primarily because of its own mistakes and partly due to the hostile policies of other states,” he said.

Retired Lt-Gen Nadeem Lodhi said the existence of such a “formidable bloc” in the neighbourhood had “ominous and far reaching implications” for Pakistan.

However, Pakistan’s Foreign Office views the Chabahar port positively with Adviser on Foreign Affairs Sartaj Aziz saying at a press conference on Thursday that Pakistan did not see Iran’s Chabahar port as a rival and that Pakistan was in fact exploring the possibility of developing links with Gwadar.

The leaders of Afghanistan, India and Iran signed the Chabahr port agreement in Tehran, the capital city of Iran on 23rd May.

Afghanistan is expected to have sea-land access through the strategic Chabahar port in Iran by the end of this year.