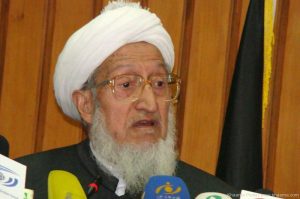 A prominent former Afghan Jihadi leader and political figure Sebghatullah Mojadedi has opposed with the protesters call for the removal of the top security officials.

Speaking during a gathering in Kabul, Mojadedi said the removal of the top security officials would be in appropriate considering the current situation of the country.

Mojadedi also called on the protesters to end to the sit-ins and refrain from causing disturbances and issues to the residents of the city during the holy month of Ramadan.

This comes as deadlock persists between the government and the demonstrators, mainly comprising of Jamiat-e-Islami supporters after the Friday demonstrations turned violent.

The Jamiat-e-Isalmi party announced its conditions for an end to the deadlock and demanded the removal of the top security officials, including the national security adviser Mohammad Hanif Atmar to step down.

The party accused the security establishments for failing to maintain security for the people during a rally on second June that turned violent and left several people dead or wounded.

The last Friday demonstrations were organized in response to the deadly bombing in Kabul on May 31st which left more than 150 dead and hundreds wounded.