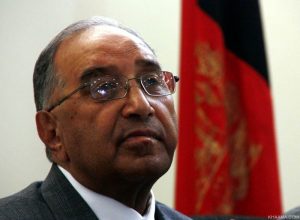 The former chairman of the High Office of Oversight and Anti-corruption Dr. Azizullah Ludin has passed away in United States.

Sources close to Dr. Ludin have confirmed the report and said Dr. Ludin passed away due to an illness on Sunday.

According to reports, Dr. Ludin left for United States last Sunday where he was supposed to undergo a heart surgery in one of the hospitals.

Dr. Ludin has also served as head of the Independent Election Commission of Afghanistan and Secretary of the Lower House of Parliament – Wolesi Jirga.

He was appointed as the chairman of the Office of Oversight and Anti-corruption in 2011 by President Hamid Karzai.

Dr. Ludin was a contender in the first round of presidential election in 2014.