Afghanistan opposes deportation of Afghans in large number from Europe 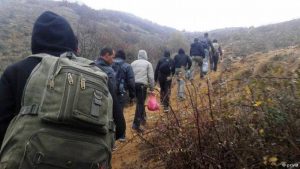 Afghanistan has opposed deportation of Afghan asylum seekers and refugees in large number from Europe.

“For now the Afghan Government is opposite [sic] for the forcible deportation because the situation is not good in Afghanistan,” said Hafiz Ahmad Miakhel, media advisor to the ministry.

“Most of the Afghans leave the country because of the insecurity, some districts are under the control of the Taliban, also Taliban and Daesh fighting against the Afghan police.”

The European Union (EU) has reportedly drafted confidential plans to deport about 80,000 Afghan asylum seekers and refugees to Afghanistan.

Besides other options, the confidential plans also include force deportation despite the surging violence in the warn-torn country.

According to ABC news, the idea has been leaked as new UN figures show a jump in the number of Afghans trying to reach Europe because of worsening security and economic situation.

Aproximately 176,000 Afghans claimed asylum in the EU last year, with around six in 10 eligible for refugee status.