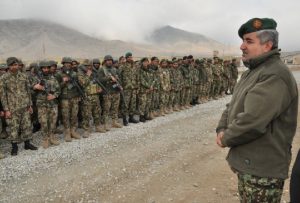 A top Afghan defense official said Sunday that the Afghan security forces successfully shunned efforts by the enemies of the country to shift Taliban’s Quetta Council to southern Helmand province of Afghanistan.

Speaking to the general session of the Afghan parliament, Afghan National Army Chief of Staff, Gen. Qadam Shah Shaheem, said the anti-government armed militants with the support of the regional spy agencies did their best to take control of large swaths of the country during the current year.

He said the enemies of Afghanistan decided to remove the name of Quetta Council and shift to southern Helmand province but they could not reach to their target.

The remarks by Gen. Shaheem comes as the security situation in different parts of Helmand province have been deteriorating with the increased insurgency activities by the anti-government armed militant groups.

The local government officials had earlier admitted that the militants are looking to shift the Quetta Council to Helmand province by taking control of the northern districts.

The Quetta Council plays critical role in the leadership and activities of the Taliban group in Afghanistan.

The Afghan authorities also blame the Quetta Council for plotting and coordinating the major Taliban offensives and terrorist attacks in Afghanistan.