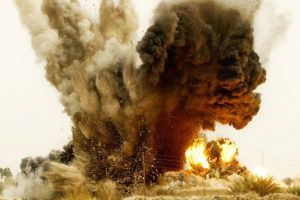 An airstrike was carried out in eastern Nangarhar province of Afghanistan on Thursday targetig a compound belonging to the Islamic State of Iraq and Syria (ISIS) terrorist group loyalists, the local officials said Friday.

The airstrike was carried out in the vicinity of the restive Khogyani district, leaving at least twelve fighters of the group dead or wounded.

The provincial government media office in a statement also confirmed the airstrike left at least four ISIS militants dead and eight others wounded.

The statement further added that the US unmanned aerial vehicles targeted a compound of the terror group in Wazir Tangi area.

This comes as at least eight foreign militants were killed in a similar airstrike in this province on a day earlier.

The 201st Silab Corps officials said the airstrikes were carried out on Wednesday in the vicinity of the restive Achin district.

The officials further added that the militants were targeted in the vicinity of Mamand Margha, leaving eight dead.

According to the Silab Corps officials, the militants killed during the airstrikes were likely hailing from the Pakistan.