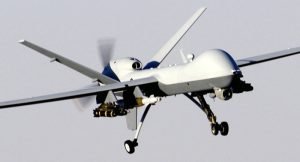 A drone strike has likely killed a commander of the Taliban group and at least six civilians in his custody in northern Kunduz province of Afghanistan.

The US officials have said they are investigating the alleged death of six civilians who were kept as hostages by the Taliban commander.

An official in the Department of Defense has confirmed the airstrike in Kunduz province on Saturday and an investigation is underway regarding the alleged death of the civilian prisoners in the raid.

The slain Taliban commander has been identified as Janat Gul Osmani and was reportedly involved in the kidnapping of the civilians in North.

The security officials had earlier said commander Osmani was killed along with his five fighters after they were targeted in the airstrike.

Police commander Sher Aziz Kamawal has told Reuters that the Taliban militants killed six civilians to retaliate the killing of the group’s commander.

The Taliban group has not commented regarding the report so far which comes as the security situation has sharply deteriorated during the recent months in Kunduz.

The group has abducted scores of passengers from the main highway in Kunduz during the recent weeks to interrogate them if they work for the government of Afghanistan.