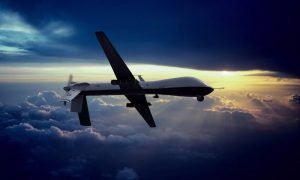 At last five militants were killed in a drone strike apparently carried out by the coalition security forces in eastern Kunar province of Afghanistan.

The Ministry of Defense (MoD) said Sunday that the airstrike was carried out on Saturday in Shegal district, targeting a group of militants in Chogam area.

MoD in a statement said at least two militants were also injured in the airstrike but did not disclose further information regarding the identities of the militants killed in the raid.

The anti-government armed militant groups including the Taliban group has not commented regarding the report so far.

Kunar is among the volatile provinces in eastern Afghanistan where anti-government armed militant groups are actively operating and frequently carry out insurgency activities.

Militants loyal to the Afghan Taliban as well as Tehrik-e-Taliban Pakistan (TTP) and other insurgent groups are active in various districts of Kunar.

A commander of Tehrik-e-Taliban Pakistan (TTP) was killed in a similar strike in Shegal district earlier in the month of November last year.