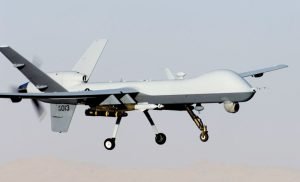 At least seventeen loyalists of the Islamic State of Iraq and Syria (ISIS) terrorist group were killed in airstrikes in eastern Nangarhar province of Afghanistan.

The Ministry of Defense (MoD) said the airstrikes were carried out in Deh Bala district on Saturday afternoon.

According to MoD, the airstrikes were carried out by the coalition forces involving at least eight raids targeting the loyalists of the terror group.

Airstrikes carried out by coalition forces and Afghan Air Forces targeting the loyalists of the terror group in Nangarhar province have been rampant during the recent days.

A key commander of the terror group was killed along with ten others in a similar raid in Achin district earlier on Friday.

Nangarhar is among the relatively volatile provinces in eastern Afghanistan where anti-government armed militant groups including the fanatics loyal to the ISIS terror group are actively operating in a number of its remote districts.