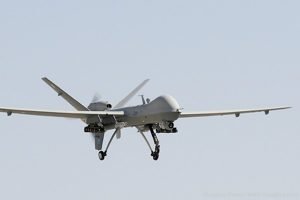 The airstrike was reportedly carried out on Saturday at Pak-Afghan border on zero line with Paktika province along South Waziristan Agency.

Two top commanders of the Badr Mansoor group were also among those killed following the airstrike.

According to informed sources, the a militants compound was targeted by US drone near Komal village of Paktika province.

Sources further added that the key militant commanders were identified as as Aqalzadin and Ikramullah.

In the meantime, residents of Watapur district in Kunar province said Saturday a senior Taliban commander identified as Mullah Basir was killed following a drone strike.