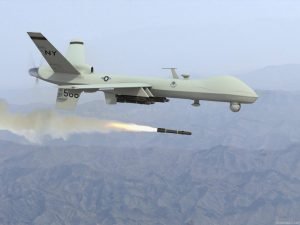 Seven fighters belonging to the terrorist group of Haqani Network were killed in a drone strike in eastern Khost province on Sunday.

Officials say that the air strike took place in Spera district where a drone fired at a vehicle of terrorists belonging to Haqani Network.

Seven insurgents were killed and their vehicle completely damaged in the attack.

Khost has a long border with North Waziristan where the group’s leaders are believed to be hiding.

Today’s airstrike happens a day after Afghan Intelligence agency also known as National Directorate of Security (NDS) arrested a suicide attacker and a commander of a terrorist group, both belonging to Haqani terrorist Network in eastern Laghman province.

The suicide attacker according to the NDS had planned to carry out a suicide attack in the city of Mehtarlam and the commander was assigned by Haqani network for terrorist activities in Laghman province.

Haqani network is blamed for several terrorist attacks not only in the border areas with Pakistan but also in Kabul.